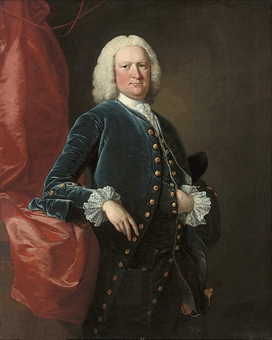 When public affairs and his manifold interests were taking up much of his time, Edmund Halsey having no sons to follow him, brought a young man into the business. This was Ralph Thrale, born in 1698, the only son of Ralph Thrale, the Elder (1665-1711), a yeoman, of Offley, Hertfordshire, and Anne Halsey, the sister of Edmund Halsey.

He was described as…

a goodlooking fellow and as industrious as he was comely.

The locality
It seems likely that Ralph Thrale came to London to work in his uncle's Brewhouse after his father's death in 1711, aged around 13.

worked at six shillings a week for twenty years in the great brewery which afterwards was his own.

Ralph learnt the business and did very well but managed to put his uncle's nose out of joint domestically. When Ralph took a wife in the early 1720's, he choose Mary Dabbins, whom his uncle was contemplating as a second Mrs. Halsey. The uncle seems to have accepted the situation without complaint at the time. On Edmund Halsey's death in 1729, eighteen years after Ralph Thrale started at the brewery, there was no mention of Ralph Thrale in his will.

The brewery was inherited by Halsey's son-in-law, Viscount Cobham. A peer of the realm could not be connected with a brewery, so Cobham had to sell. This proved difficult, so it was suggested that the brewery be transferred to Ralph Thrale, known as being a sensible, active and honest man. Security for the sale price of for thirty thousand pounds was taken on the property1. That Ralph Thrale was the owner in 1731 is indicated by his name on a deed concerning the Brewhouse.

Eleven years after buying the Anchor Brewhouse, Ralph had repaid the loan and was making a large fortune.

Ralph Thrale continued the expansion of the Brewhouse and purchased, amongst other land, a plot at Bankend upon which he built a waterworks to supply the business. Later these works were purchased by 'The Borough Water Works' a company which replaced the machinery worked by horses with a steam engine in about the year 1770.

Ralph expanded the business and by 1750 production rose to 46,100 barrels, equalling the other great London brewery - Benjamin Truman. The same year the net assets were £72,000, however at the time of his death eight years later the net assets were £56,000. At this time brewing was half as much as Trumans (60,000 barrels) and Whitbread (64,588 barrels).

Ralph Thrale was Member of Parliament for Southwark between 25 June 1741 and 1747. He was also High Sheriff of Surrey, and Master of the Brewers' Company in 1748.

In 1747 William Hindley was convicted at the Old Bailey of stealing two Butts from Ralph Thrale2. Hindley's punishment was deportation.

Ralph had three daughters and a son called Henry Thrale. Henry's allowance from his father was splendid, at least a thousand pounds a year.

Ralph used his riches to gave his four children the best education. Baron Cobham's esteem for Ralph gave him much attention, and his children associated with "men of first rank". Ralph used to say of his son Henry…

If this young dog does not find so much after I am gone as he expects, let him remember that he had a great deal in my own time.

Ralph Thrale died on 9 April 1758. Upon his death a popular London Magazine of the time described Ralph as …

the greatest brewer in England3.