Thanks to Christopher Bryant, whose kind contribution helped to bring this information to you.

The Anchor Volunteers were raised in 1795 to protect the Anchor Brewery and other premises in Southwark against "riots tumults and unlawful meetings"1. The uniforms and arms were funded entirely by the brewery. 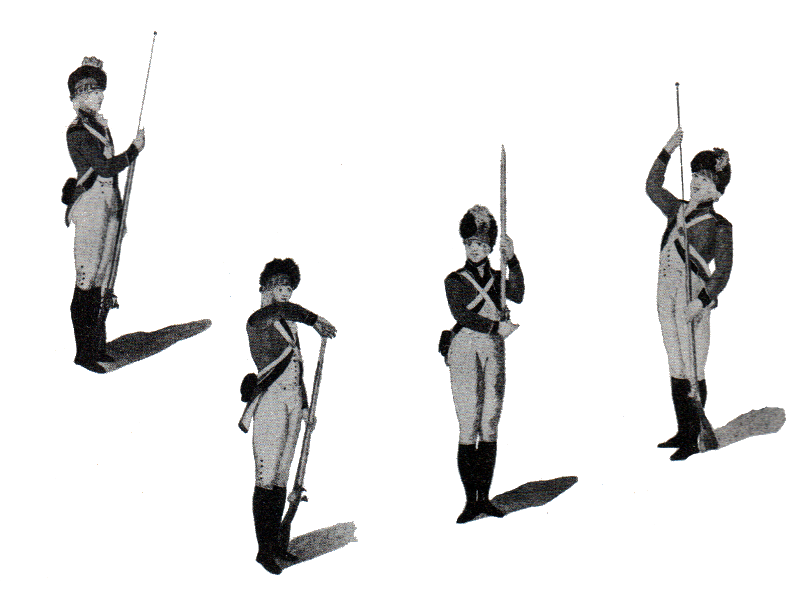 Further evidence of the Volunteers came with the recent purchase of military uniform by collector Christopher Bryant. He wrote…

I am a collector and dealer of 18th and 19th century British military antiques, and recently found in a provincial English auction in Sussex an unidentified old military jacket and shako, distinguished only by the device of an anchor on the shako and the buttons of the jacket. The auction house clearly had no idea what they were, but I recognized from a photo on their website that they were c.1810 in date - this pattern of shako was only worn in the British army between c.1807 and 1812. In fact, this may be the only surviving example of this form of infantry shako worn by an other rank left in existence. 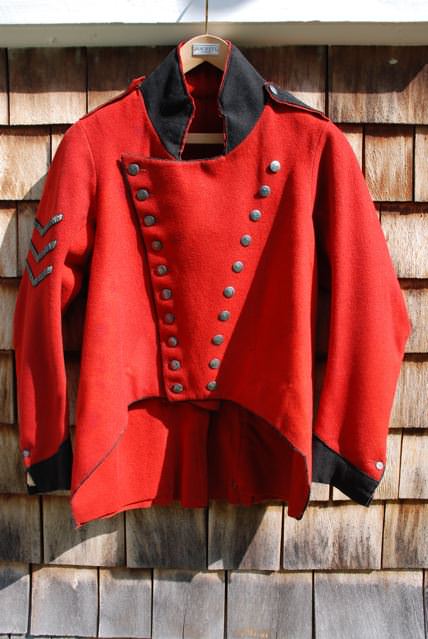 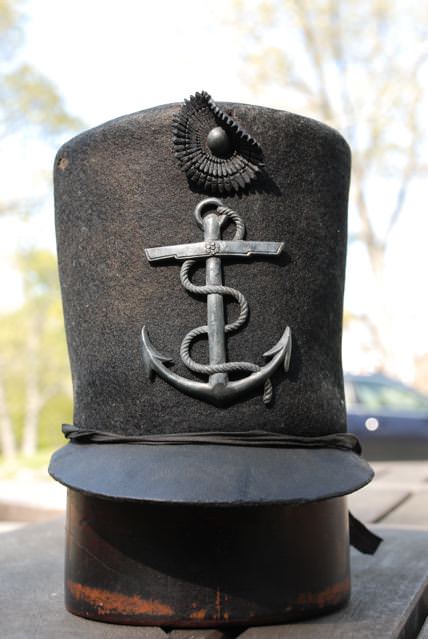 Naturally I bought them, and then set about trying to identify what unit they related to. The auction house could only tell me they were consigned along with a group of pub decorations by a commercial firm. I had a stroke of luck when I checked with an old veteran dealer in British militaria, who said the pieces matched exactly photos he'd been shown of the same items about fifteen years ago, then on display in the offices of the Courage Brewery. Looking at the history of Courage, I noticed they had bought out the Anchor Brewery, from Barclay, Perkins & Co.

Another stroke of luck revealed via a Google search of "Barclay & Perkins" combined with "Volunteer" I found an on-line transcription of a book called Napoleon and the Invasion of England; The Great Terror" - by H.F.B. Wheeler and A.M Broadley2 which included the following reference:

In the dining room of the historic brewery which Dr. Johnson managed for a brief period as the executor of his friend Mr. Thrale, the representatives of Messrs. Barclay, Perkins & Co. preserve the helmets and accoutrements of some of the Loyal Southwark Volunteers of the time of the Great Terror. Their war-song, written by and officer of the corps, was short but to the purpose:—

Hark! the threats of Invaders resound thro' the air,
See! a vengeful and menacing foe—
Already the warriors for conquest prepare,
Our Riches, our Beauty, already they share,
Our Cities and Commerce lay low:—

But conquest and plunder by Britons withstood,
Shall sink with the boasters in waves;
Or the soil which our Forefathers nurtured in blood
Shall drink from our veins the rich vital flood,
Ere Britons submit to be slaves.

So that was the mystery solved. I also found on-line an image of one of the c.1798 Rowlandson prints of the Loyal Volunteers of London & Environs, which shows a one of the Southwark Volunteer units in a red jacket with black facings. 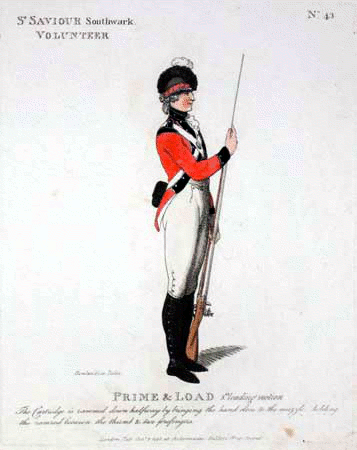 The explicit and repeated use of the fouled anchor as the one and only device is a very interesting early example of corporate branding sponsorship - presumably the great majority of the men in this unit would have been drawn from among the employees of the Anchor Brewery, and I wouldn't be surprised to find that Barclay & Perkins had paid for the equipage of the corps, which would explain why some of it remained in their offices. In fact Wheeler and Broadley have evidently misidentified the unit - there was one at the time called the Loyal Southwark Volunteers, but they are recorded as having a different uniform. The St. Saviours Volunteers, however, as shown by the 1798 print, did wear a red coat with black facings and silver or white metal buttons.

The cut of military jackets had evolved fairly universally to the style displayed by my jacket by c.1810, while the style of shako was worn only from c.1807 to 1812. Further evidence is found in the list of officers of the St. Saviours Volunteers, which shows that the senior Captain from 1804 was Frederick Perkins, partner with his brother Henry in Barclay, Perkins & Co.

Also, this small unit of approximately 150 men was unusual in accepting no support or pay from the government, which both suggests that the firm paid all the expenses, and thus also explains why the examples of uniform and accoutrements were left in the firm's offices.

The name "Morgan" is written in the shako, and I wonder if it would be possible to try and trace any pay lists of the Southwark Volunteers of the period to identify the actual Sergeant. Otherwise perhaps a parish registry? Any suggestions as to how I might go about that process would be much appreciated. I would be grateful if you could let me know of any other suggestions you may be able to offer of how I might go about researching the history of this unit of volunteers in relation to Barclay, Perkins & Co.

The body text for this page would benefit from improvement. All articles in need of copyediting »