Water End, Sandridge (now Wheathampstead), on the north bank of the Lea, about a mile south-west of Ayot St. Peter, is a fine old brick mansion. It was probably built by Sir John Jennings a well to do Hertfordshire land owner in about 1610.

There is nothing of interest within the house, beyond a good oak staircase, a little panelling, and the usual long garret extending the whole length of the building.1 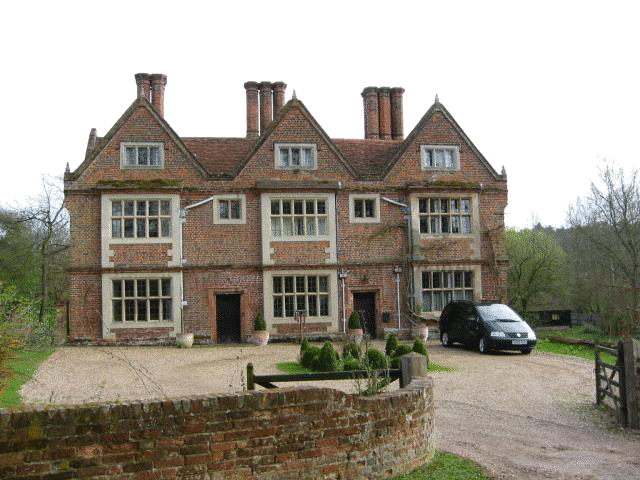 On his death, Richard Jenyns inherited the properties. Here was born on the 5th June, 1660, Sarah Jenyns, who was baptised in the Abbey of St. Albans on the 17th of the same month. Despite an income of £4,000 a year, the family fortunes faltered severely and Richard Jenyns died insolvent in 1667.

Sarah Jenyns spent much of her time at Waterend, but in 1673, the pretty and self-willed girl left Hertfordshire to go to Court in London. Two years later she met and fell in love with Colonel John Churchill, who became First Duke of Marlborough and Queen Anne's great General. Sarah, as Duchess of Marlborough, became the Queen's favourite and close confidant, and held great influence at Court. Though much travelled in later years, she always had great affection for the area of her birth and often returned - then living in Holywell House, St Albans. A chronicler of that time noted of Holywell that…

She never ceased to praise its air.

She died an irascible 85.

In 1938 the Barn was no longer needed for its original use at the farm, and the Brocket Estate decided to dismantle it - timber by timber, re-erect it on a site they owned in the middle of St Albans and let it as a restaurant.

This was completed in 1939 and two brothers, Ralph and William Thrale, who owned and ran a long established local family bakery business took on the lease. In the next few years the site was enlarged with the addition of the Little Barn, brought over from Little Harmed.

Best days at the Barn were in 1941 when Thrales had the place. Every Thurs night a dance!

In 1978 the Thrale family decided to relinquish their interest in The Barns and they were sold to Simmons of Hatfield, another long established family baking and catering business. Later it was run by the Coles family and trades under the name of Moorsom & Co. Ltd. Robert Coles is a grandson of the founder, Reg Simmons.

Watered Barn was refurbished and run by chain pub operators Wetherspoons since around 2005.

As a Thebridge, researching the family name, I was interested in the reference to Thebridge or Waterend as it known now and the tenant Viel de Thebridge as referred to on thrale.com . Our earliest surname recordings come from christenings in Ayot St Lawrence, Kimpton and Kings Walden, in the early 1500's. This would strongly suggest a link to the above tenant. I would be most interested in any information you may have or in any pointers as to where else I could investigate this link.

I have found a reference marked Waterend on the map on the River Lea east of Wheathampstead, Is this the spot referred to or not?

With grateful thanks for any assistance you can give.
Dr Peter Thebridge

Thanks for the enquiry. Firstly let me say that I am not a local (I live about 30 miles away in London) nor am I a local historian. However, I do have a little information that may help you and can point you in the direction of people who are likely to know more.

The main source I have is the book Historic Sandridge Revisited, edited by Janet R Rose.

Janet has contacted me (to see what she said, search here on her name. She is very helpful and certainly knows a lot more about this and has good contacts with other local historians.

Anyway, on with what I can find. I believe that Waterend is (or was) a farm in (or next to) Sandridge, Hertfordshire. In addition to the stuff on thrale.com that you have already seen, Janet's book says...

In the County Record Office at Hertford the Manor Court records from 1238-1326 are lodged in wonderful condition, showing in Latin, some of the transactions of this area of Sandridge ... Most of these record copyholder transfers during the reigns of King John and Henry II. One of the copyholders was recorded as Thebride.

The book also has an image of Waterend from 1895, and talks about how Sarah Jennings, later the Duchess of Marlborough may have been born at Waterend before the family moved to Holywell House in St Albans. Also on page 25 of her book is a map of Sandridge from 1725 that includes Waterend.

The book (despite not having Waterend in the index) has a few other mentions of it, and at only £7.50 is worth getting. Other leads worth trying are Chris Reynolds' excellent Hertfordshire history and genealogy web site.

Good luck I hope that this helps. Do let me know how you get on.