A tablet monument to Henry Thrale was erected on 20 September 1782 in St Leonard’s Church, Streatham, London, on the wall of the south aisle between the door of the choir vestry and the window. The monument is close to his mother-in-laws monument, Hester Maria Cotton. 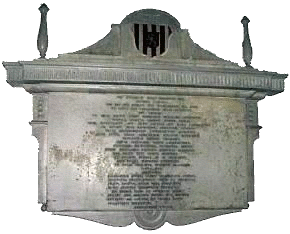 The monument is in Latin and was made by Joseph Wilton R.A. stage coach carver to the King who made George III's coronation coach, and created the memorial to General James Wolfe in Westminster Abbey. The epitaph one of only three written by Samuel Johnson. The other two being Oliver Goldsmith and Hester Maria Cotton.

Thus a happy and opulent family, Raised by the grandfather, and augmented by the father, became extinguished with the grandson.

Here are deposited the remains of HENRY THRALE Who managed all his concerns in the present world, public and private, in such a manner as to leave many wishing he had continued longer in it; And all that related to a future world, as if he had been sensible how short a time he was to continue in this. Simple, open, and uniform in his manners, his conduct was without either art or affectation. In the senate steadily attentive to the true interests of his king and country, He looked down with contempt on the clamours of the multitude: Though engaged in a very extensive business, He found some time to apply to polite literature And was ever ready to assist his friends labouring under any difficulties, with his advice, his influence, and his purse. To his friends, acquaintance, and guests, he behaved with such sweetness of manners as to attach them all to his person: So happy in his conversation with them, as to please all, though he flattered none. He was born in the year 1724 1, and died in 1781. In the same tomb lie interred his father, Ralph Thrale, a man of vigour and activity, And his only son Henry, who died before his father, Aged ten years. Thus a happy and opulent family, Raised by the grandfather, and augmented by the father, became extinguished with the grandson. Go, Reader! And reflecting on the vicissitudes of all human affairs, Meditate on eternity.

After the monument was erected, Hester Thrale wrote in Thraliana…

A Character Epitaph is I see better to be liked in Print than in a Church: I was shocked to see Contemptor animosus vulgi in a Place whence Contempt should be certainly expelled; & where no man is more vulgar than another however exalted by Human Condition was the Person who so contemn'd him. Here have I finished the Epitaph for my Husband, I mean the Transcribing it--& I now I am going to leave Stretham for three Years, where I lived--never happily indeed, but always easily: the more so perhaps from the total Absence of Love and of Ambition Else those two passions by the way Might chance to show us scurvy Play. 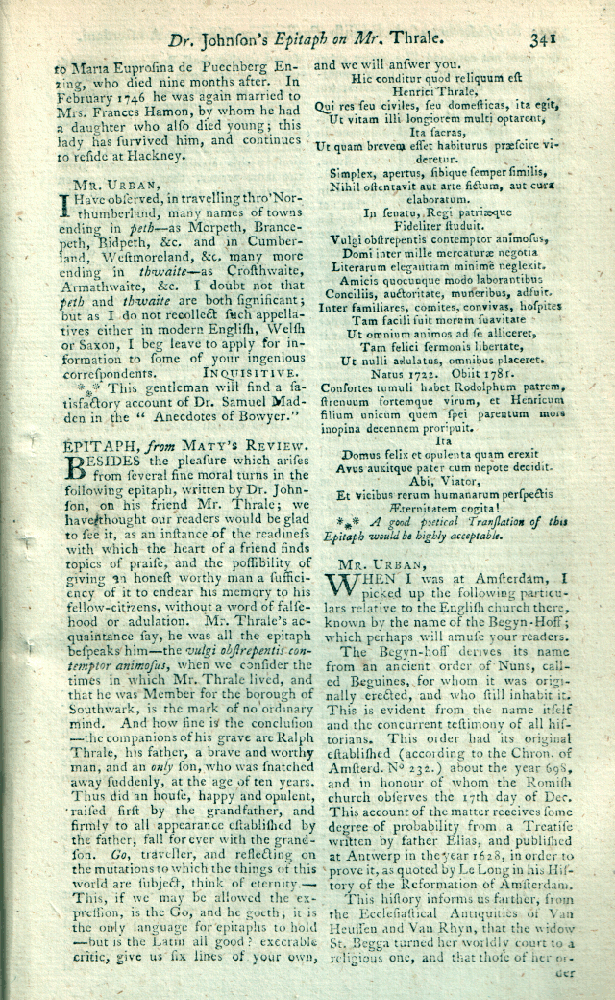 BESIDES the pleasure which arises from several fine moral turns in the following epitaph, written by Dr. Johnson, on his friend Mr. Thrale; we have thought our readers would be glad to see if, as an instance of the readiness with which the heart of a friend finds topics of praise, and the possibility of giving an honest worthy man a sufficiency of it to endear his memory to his fellow-citizens, without a word of falsehood or adulation2. Mr. Thrale's acquaintance say, he was all the epitaph bespeaks him--the vulgi obftrepentis contemptor animofus3, when we confider the times in which Mr. Thrale lived, and that he was Member for the borough of Southwark, is the mark of no ordinary mind. And how fine is the conclusion--the companions of his grave are Ralph Thrale, his father, a brave and worthy man, and an only son, who was snatched away suddenly, at the age of ten years. Thus did an house, happy and opulent, raised first by the grandfather, and firmly to all appearance established by the father, fall forever with the grandson. Go, traveller, and reflecting on the mutations to which the things of this world are subject, think of eternity.-- This, if we may be allowed the expression, is the Go, and he goeth; it is the only language for epitaphs to hold--but is the Latin all good? execrable critic, give us six lines of your own, and we will answer you. ** A good poetical Translation of this Epitaph would be highly acceptable.**

The epitaph was also published by: