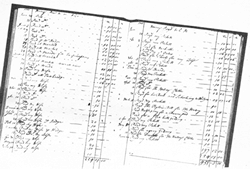 During the first decade of the century Halsey amassed great wealth. Less than ten years after his first appearance at £1 a week in the firm's accounts, on the 11th May, 1696, Halsey lent King William III £1,000. In 1698 he started to extend the Brewhouse and its trade.

On the 23rd May of that year he

He paid large sums for new coppers and buildings and no doubt these included the extension of the business over the site of Shakespeare's play-house: also he paid £3,500 to a Mr. Clarke, Brewer.

A valuable source of income seems to have been derived from lending money. One interesting item, dated 22 April 1700, reads:

In the margin, he added

Man's livery, new sadle and bridle, wine for Hunt, long wigs and short wigs, shoes, shirts and books and shooting for Tho. Halsey.

Edmund's wife, Anne, died in 1704. Thomas was his younger son, and both he and his brother, James, must have died young, for only Anne, his daughter, who married Richard, Lord Cobham, is mentioned in his will.

During the second decade he established his social position. In 1710 he stood for Parliament but was defeated. Later when his opponent died, however, he was returned as Member of Parliament for Southwark. This was disputed by Sir George Matthews who on the 14th January, 1711, petitioned the House of Commons, complaining of an undue return of Mr, Halsey, by bribery and other indirect practices, and also of partiality of the High Bailiff. The House resolved:

that Edmund Halsey is not duly elected

that the said Henry Martin, Esq. (the Bailiff) be for the said offence taken into custody of the Sergeant at Arms attending this House

He was employed for 30 years at 6/- a week in the brewhouse that was afterwards his own.

Later Halsey fought two successful elections in 10th May 1722 and 23rd January 1727. He represented the Southwark constituency on and off for about ten years.

Edmund Halsey was Governor of St. Thomas's Hospital in 1719, Master of the Brewers Company, and a Director of the South Sea Company. He followed the practice of other successful citizens of the Borough by acquiring agricultural land and a country seat.

His son Thomas, whose schooling was mentioned in the accounts in 1702, died young as did his brother James. His only daughter, Anne, was successfully married off into the peerage to Sir Richard Temple, 1st Viscount Cobham of Stowe from 1713 (1675-1749), friend of Alexander Pope.

In 1725 he bought The Castle public House.

He was described in the parish records as "Lord of the Manor at Stoke Poges where he was buried on his death in August 1729. His will assigned not only the property in Southwark but farms at Orpington and Boughton Monchelsea and properties at Newington, Camberwell, Croydon and Mitcham, was left to his wife and daughter, then to Lord Cobham for life, and failing issue of the marriage, to his niece, Anna Smith, of St Albans. Anna Smith was the sister of Ralph Thrale (1664-1711), the younger, who succeeded Halsey as the owner of the brewhouse and of whom Dr. Johnson wrote:

he was employed for 30 years at 6/- a week in the brewhouse that was afterwards his own.

I'm currently working on a programme about Stowe Landscape Gardens and I'm looking for a picture of Anne Halsey, daughter of Edmund Halsey, who married the 4th Baronet, Viscount Cobham, who created the gardens.

Do you know if there is a painting of Anne? It would help illustrate the story of how Viscount Cobham created the gardens. I've tried the National Trust and the National Portrait Gallery but with no luck. I'd be very grateful of any help or advice you might be able to offer. Thank you very much and I look forward to hearing from you soon.